The organic fertilizer production line process first eliminates the odor of livestock and poultry manure. During the fermentation, straw, plant leaves, weed powder and other plant stems and leaves should be added in proportion. At the same time, fermentation bacteria should be added to decompose the crude fiber in it, so that the particle size after crushing meets the particle size requirements of granulation production.

The fermented materials that have completed the secondary aging and stacking process are crushed and enter the mixing and stirring system. Before mixing and stirring, according to the formula, add N, P, K and some other trace elements into the mixing and stirring system, start stirring, and combine the mixed material conveying is like a disc granulator machine for fertilizer. The granulation enters the cooling system after passing through the dryer. The material is brought to room temperature and then sieved. The granules that meet the requirements enter the coating machine to wrap the coating film and then start packaging. The granules that do not meet the requirements after being crushed by the pulverizer, return to the disc granulation system to continue granulation.

2. Sprinkle the fungus evenly, turn the pile and ferment to heat up, smell and decompose, and kill weeds

3. Fermentation for 7-12 days, the number of times of stacking varies according to different temperatures in different places

4. Completely fermented and decomposed, out of the pool (ground type, directly piled up with a forklift)

5. Use a grading sieve for coarse and fine screening (the powdered fertilizer that has been screened can be sold directly)

6. After crushing the screened large pieces with a crusher, return to the grading sieve

7. Mix the required trace elements with a premixer

8. Granulate with an organic fertilizer granulator

9. Send to the dryer and cooler 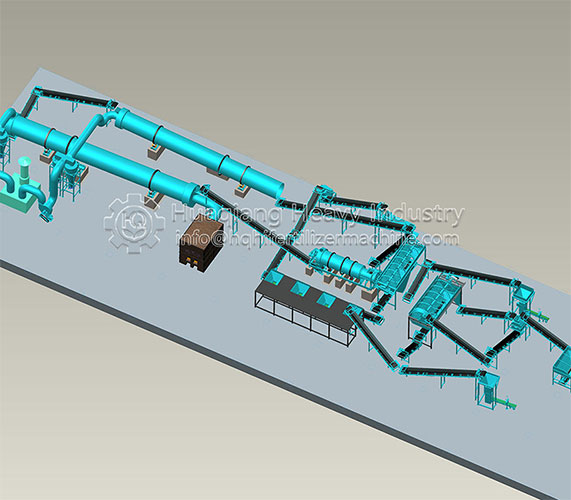 Pre:Introduction to the granulation method of organic fertilizer granulator

Next:Introduction to the configuration of manure organic fertilizer production equipment