Chicken manure organic fertilizer granulation process: Organic fertilizer production enterprises will use special vehicles to collect chicken manure at various farms regularly to avoid secondary pollution to the road and pavement, and the recovered chicken manure will directly enter the fermentation area. After primary fermentation, secondary aging and stacking. First, the odor of chicken manure is eliminated. In one fermentation, straw, plant leaves, weed powder and other plant stems and leaves should be added in proportion. At the same time, fermentation bacteria should be added to decompose the crude fiber in it, so that the particle size after crushing meets the particle size requirements of granulation production.

The working principle of the disc organic fertilizer granulator: It is mainly composed of an angled disc and a base, which can be adjusted by consultation. During the fertilizer granulation process, there is a mixed material that is mixed by the mixer and sent to the top of the disc by a conveyor. A certain amount is added to the disc, and the materials in the disc are adhered by the two adhesives under the spray and wrapped into granules. With the rotation of the disc, the particles gradually grow up. Due to the remarkable classification ability of this machine, the large particles float on the top and continuously flow out from the bottom of the disc, while the small particles continue to grow with the newly added materials. This machine has the characteristics of uniform granulation, less granulation return, and large production capacity.

2. Precautions during the working process of the granulator. Pay attention to the temperature change of the body at any time. When touching the sliver with clean hands, the temperature should be raised immediately. Until the sliver touches your hand, it is normal. When the bearing part of the reducer burns, or is accompanied by noise, it should be overhauled in time and refueled. 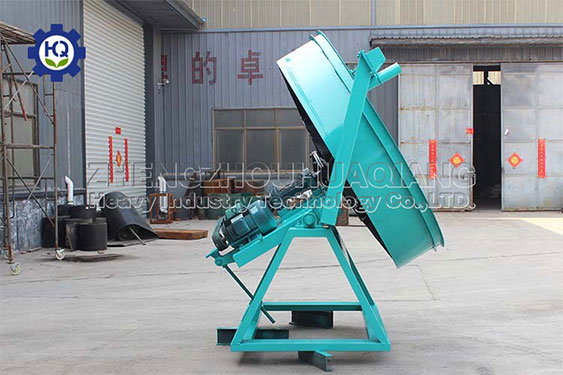 When the bearing parts at both ends of the bearing chamber of the main engine are hot or there is noise, stop the machine for maintenance and add butter. During normal operation, add butter to the bearing chamber every 5-6 days. Pay attention to the operating rules of the machine; for example, the machine temperature is high or low, and the speed is fast or slow, which can be dealt with in time according to the situation. When the fuselage is unstable, you should check whether the gap between the couplings is too tight, and adjust it to loosen it in time.

The fermented materials that have completed the secondary aging and stacking process are crushed and enter the mixing and stirring system. Before mixing and stirring, according to the formula, add N, P, K and some other trace elements into the mixing and stirring system, and start stirring. Material conveying is like a disc granulation system. The granulation enters the cooling system after passing through the dryer. The material is brought to room temperature and then sieved. The granules that meet the requirements enter the coating machine to wrap the coating film and then start packaging. After being crushed by the pulverizer, it returns to the organic fertilizer pellet machine and continues to granulate. After the above procedures, chicken manure becomes the main raw material of organic fertilizer, and it enters the sales market for direct sales.

Pre:How much does an organic fertilizer production line for livestock and poultry waste cost?